You may have noticed when installing Office 365 via the Click to Run installer you get a popup like this for each user. 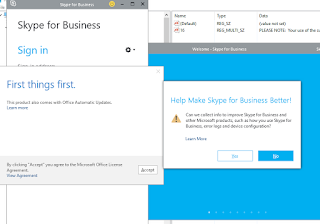 You will no doubt have seen many methods to make this go away, however in my testing none of the popular suggestions actually work, like:

These methods may work for standard Office 2016 installers (usually set via OCT) but for 365 because it is licensed per user this notification will be generated for each user account that runs office.

If you would like to properly suppress this you need to perform the following during OSD.

1. Find a step after you install Office 365 in your task sequence.
2. If you have a batch file or script that does windows customisations add the following to it (or create a new script). 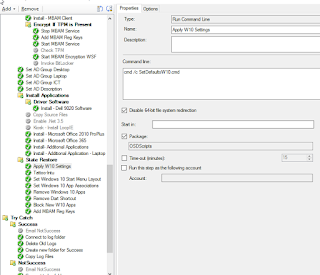 (Step in TS - script is in SetDefaultsW10,cmd)

What we are doing here is loading in the Default User registry hive and adding the entry which is created when each user accepts the EULA.

We do this via OSD as the key has the computers hostname within it, and making this dynamic from a Group Policy preference is not easily achieved.


Also, i set the following

NB. In SetDefaults,cmd i also set speech language to en-GB and set up DesktopInfo.